In this page I have included some unusual or special mignon; mignons illustrated
below were used as a promotional item during the 60/70, these
backlabels advertised restaurants and bars and generally were distributed free of charge:

Another example of mignon-souvenir is offered by hotels; in this case the bottles
they can have a personalized label or a tag hanging from the neck.
(interesting '60s mignon from the Sahara Hotel in Las Vegas, Nevada):

This miniature by Vermut Chinato - Alessandro Zoppa from Canelli should date back to the '40s during the
war period or slightly later, but the peculiarity is the fact of having been bottled
with a recovery glass belonging to the Gancia.
Now the label is almost completely faded but by carefully observing it is possible to see the
"Gancia" inscription in relief on the glass, covered by the main label.
The recovery glasses were used during the war and in the post-war period due to the impossibility of
find the materials; they were used above all for the liter format, in this case also for the mignon:

The following mignon, produced and bottled in Cuba, using a recycled glass of Cinzano
(the writing can be seen below under the main label).
Cuba being subjected to economic blockade for many years, has faced the problem
the sourcing of raw materials:

The peculiarity of the next mignon is the fact of being a "Sample without value"
Scotch Whisky is a product from Red Lion Blending of London in the 60s or 70s and
probably intended for tasters and blenders of whiskey:

The following mignon I think is the oldest of my collection, it is a US Rye Whiskey of the
Sunny Brook and as evidenced by the date printed on the tax strip dates back to 1918, so
a mignon from at least a hundred years ago; to be precise, the dates printed are two: 1912 as the date of
distillation and 1918 as a bottling date.
As often happens in pieces so old, the mignon has completely evaporated:

Those that I present below are some of Whiskey mignon with custom label.
These miniature produced in the U.S. during the '60s / '70s, were made to hold events
personal items like weddings, births, gatherings of collectors, etc.:

Another example of personalized labels is the one related to mignon distributed on
airliners of various flight companies; they could have a specific label or bear
the symbol or company name directly on the main label.
I believe that few exist in circulation as they were opened and consumed on airplanes:

In the '60s the Pilla places on the market a special version of "gold" of his brandy, followed in
'70s from version always triangular enamelled gold mignon much sought after by collectors,
to such an extent as to encourage other companies to produce the gold standard "for collectors", some with a lot of
numbering and printing, here are some examples: 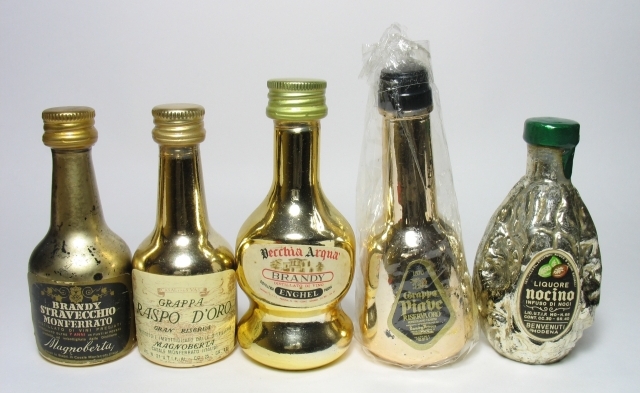 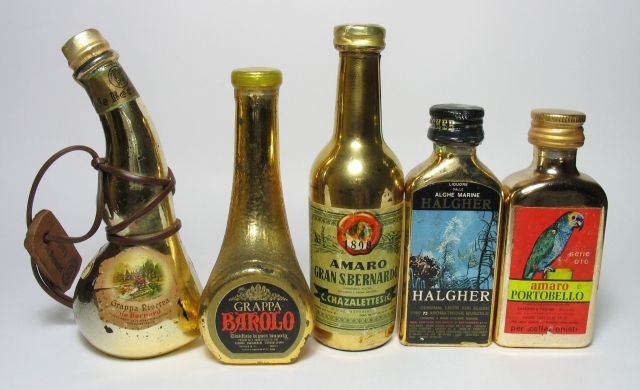 What do they have in particular these three mignon?
Nothing, except that it was my first bottles I bought at the point of sale in Ottoz
Valle d'Aosta in 1989, and from these mignon is my passion: 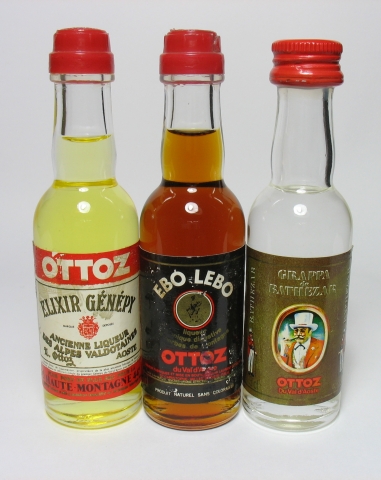 I found this curious object in a market: 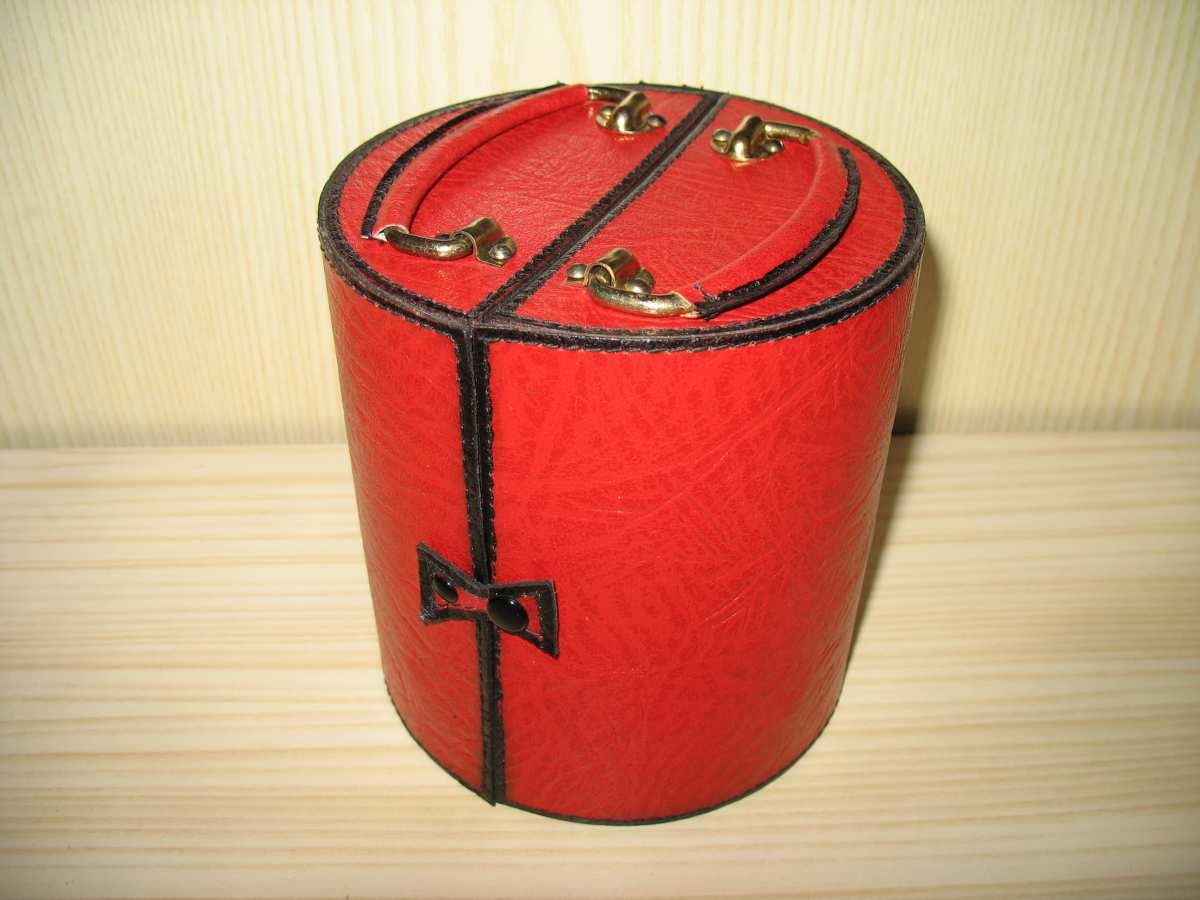 It is a travel mini-bar or porta-mignon, it dates back to the 60s or 70s,
a period in which the miniature was a practical object; the "single-dose" format came
in fact bought to be consumed and this object is a testimony.
It is covered in imitation leather and inside there are two small glasses fixed with
special stops; others six stops for bottles.

(the mignon in the photo I added them just for the example). 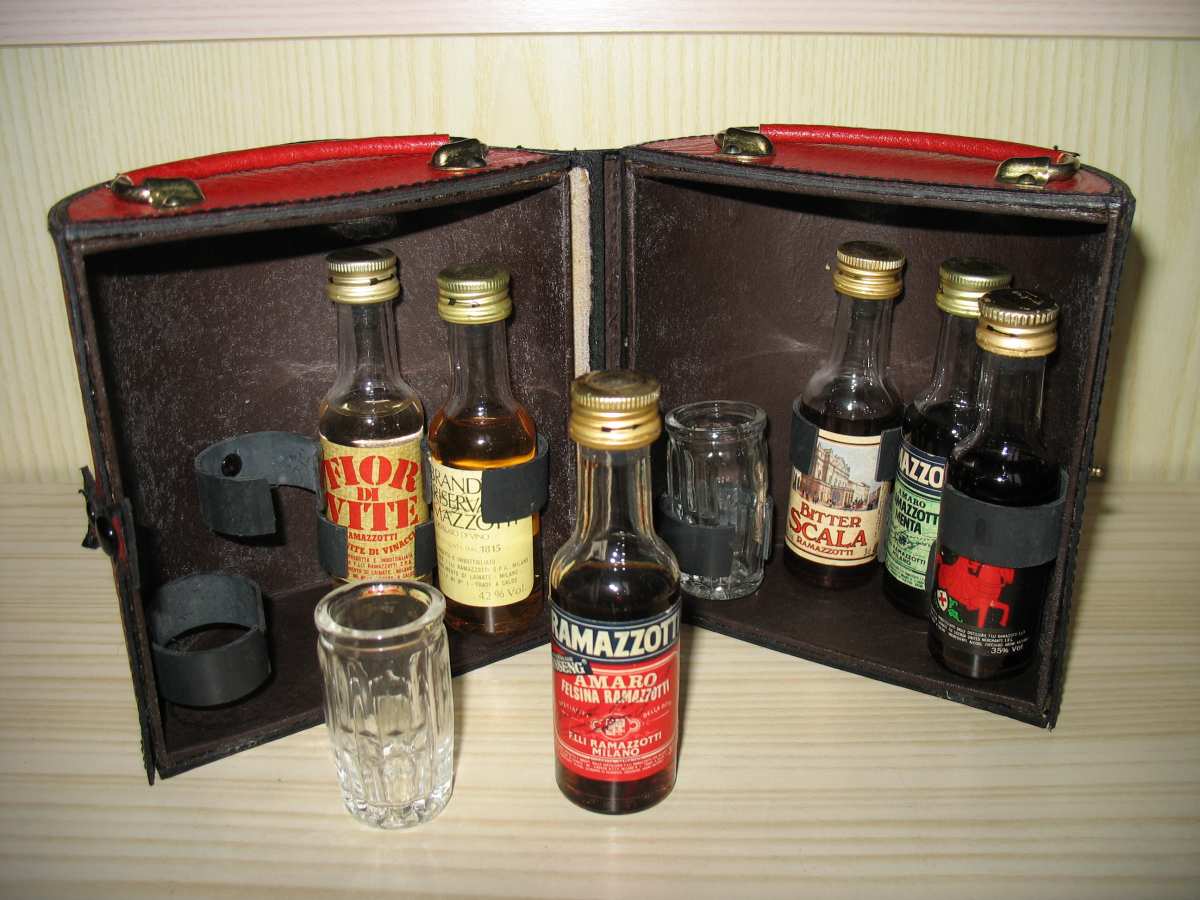