A problem common to all collectors of miniature bottles is the evaporation of the content.

The corks, especially if they have lost skin, let it evaporate
quickly, liquor, even the metal caps and Velcro flap, especially if they have suffered shock,
can detach from their original position and let it evaporate content.
I noticed that the only miniature that does not evaporate almost never are the ones that have the plastic cap,
but they are also less sought after by collectors mignon.

The type of liquor evaporation influences: the spirits such as Cognac or Whisky tend to
evaporate more (the higher the percentage of alcohol and more liquor tends to evaporate).

To prevent the evaporation of its board of miniature spread, using a brush, a layer of
Glue on the cork as well as use a brush to work faster, you can pour in a Vinavil
container and immerse the bottle cap, in this case care must be taken that the
does not glue down the miniature.
Some collectors use the melted wax soak the cap, but the end result, from the point of view
appearance is not satisfactory, the Vinavil once dry it forms a transparent film without ruining
any bands of paper, in fact, using the wax, the bands take on an unpleasant appearance "anointed"
as if they were immersed in oil. 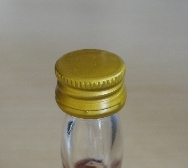 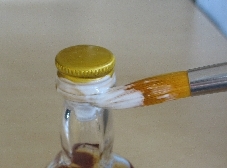 Vinavil not all are created equal: some types of Vinavil are not fit for purpose, as when dry it
layer, instead of becoming transparent is white (before starting to treat mignon Board
however, to perform the tests).

From the point of view of safety wax is much better, as it solidifies immediately,
closes any loss of the cap, but for the reasons mentioned above is not recommended;
Vinavil the other hand takes much longer to dry, once it was decided to spread the
Glue, if it forms a bubble of air at any point of the cap,
means that the miniature is a lack of closure. (example): 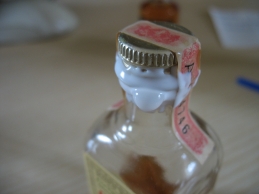 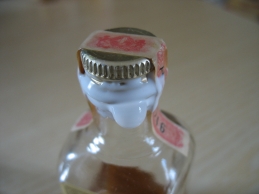 For this I recommend you wait Vinavil of drying, heat the wax and apply a small
part at the air bubble and then repeat the work of covering with the glue.
(In some cases the air bubble is formed simply because the air has remained in the area of the cap).

I recommend using the Vinavil pure, undiluted with water, the Vinavil when dry is easily removable
by inserting a small knife and removing the film, or using the water will melt Vinavil.

For some mignon instead of Vinavil, I used a clear coat crystallising (in practice this is
a perfectly transparent acrylic paint).
I used this glaze for Mignon with cork, which have lost both the outer
sovracap that the excellent results it is better not to use the clear nail polish in the presence of bands or
paper labels, because the effect is the problem that creates the wax, that is, the labels would assume
look "anointed" and would be irreparably damaged. 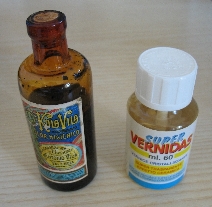 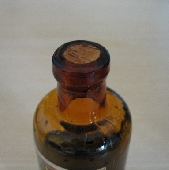 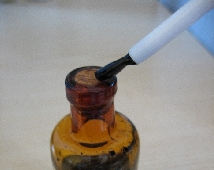 Another system that can be used is the "Parafilm ©", it is a film of wax and elastic proof used in chemistry
labs to seal glass containers, because I did not able to personally experience this film, I refer you to
two interesting articles about tips and Parafilm © evaporation:

In addition to evaporation also exists the problem of the light that contributes to fade the labels;
I personally found the effect on some mignon exposed in a showcase.
Fading is still a long process and takes years of exposure
(And not only in direct sunlight inside a home can hit the windows
but also to same light).
This only happens on a small part of labels, probably it depends on the type of
ink used for printing.

Of this phenomenon I noticed looking at some photos taken years before and
comparing them with the relative mignon today.
Here is the result of a miniature exposed for years in the window: 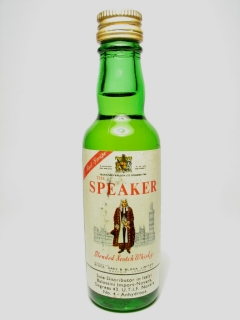 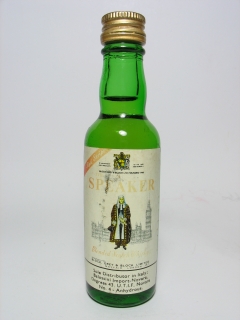 Council collectors to pay attention if you expose high-value non-mignon
exposing them to the light, especially the direct sun.
The ideal would be to have the windows with tinted windows.